Spot the Intolerance in Central Park 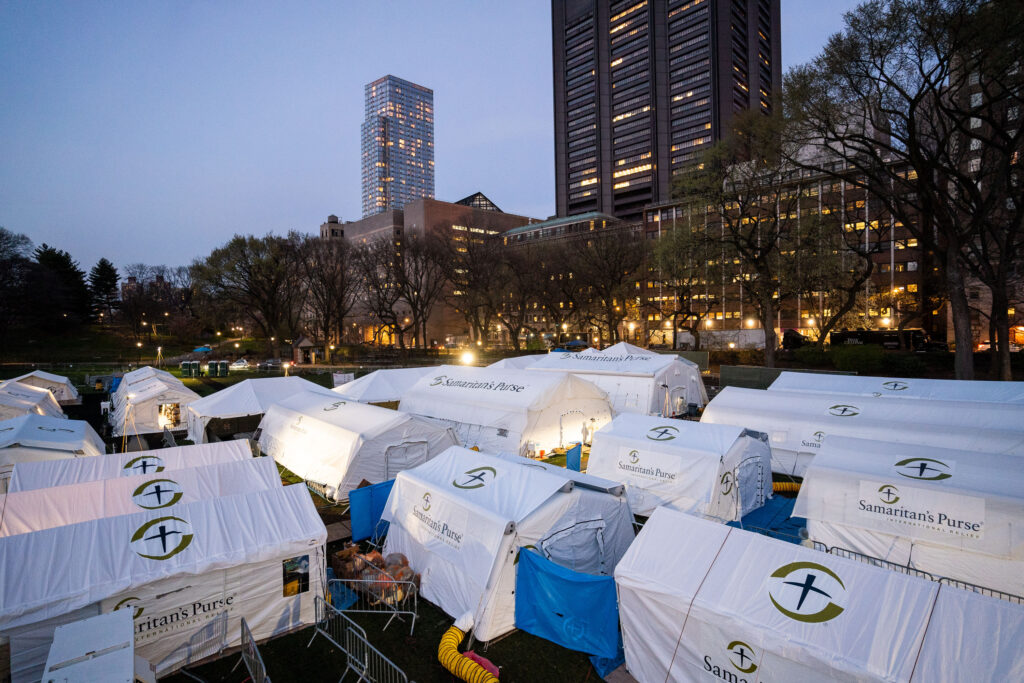 The past couple of months have been hard, but there have also been bright spots as people from all walks of life have stepped up to support healthcare workers, give to those in need, or just make the simple choice to stay home. One such act of service came from the charitable organization Samaritan’s Purse, which set up and staffed an entire tent hospital in Central Park. They partnered with Mount Sinai Hospital to provide care to over 350 COVID-19 patients when the main hospital ran out of beds.

In response,  federal, state, and local officials scorned the group over some of their religious beliefs, begrudgingly taking their assistance before running them out of town as soon as they felt the worst of the virus had passed.

Samaritan’s Purse is an evangelical aid organization with a record of providing help where it is needed most. Its current homepage features stories about the team helping with tornado recovery in Tennessee, caring for mothers and babies in war-torn South Sudan, and providing clean water to the Bahamas. Its most well-known program is “Operation Christmas Child,” which provides Christmas presents to millions of impoverished children in over 150 countries.

So why the animosity? Samaritan’s Purse is staunchly conservative Christian, and employees must sign a statement of faith that includes defining marriage as heterosexual-only. Furthermore, the organization’s leader Franklin Graham has repeatedly and unapologetically made strongly anti-LGBTQ and anti-Muslim comments.

On May 1, NYC City Council Speaker Corey Johnson put out a statement in which he called Graham “notoriously bigoted” and “hate-spewing” and said the group’s “continued presence” in New York “is an affront to our values of inclusion” and “painful for all New Yorkers who deeply care about the LGBTQ community.” After explaining that Good Samaritan was tolerated for a brief amount of time out of the City Council’s commitment “to supporting [health care system] workers and protecting our city’s public health,” he went on to demand that “Mount Sinai must sever its relationship with Samaritan’s Purse.”

Why? Because “[its] leader calls the LGBTQ community ‘detestable’ and ‘immoral.’ Not because the pop-up hospital refused to service members of LGBTQ community (they saw patients regardless of sexual orientation), and not because the NY healthcare system returned to normal operation (it remains under unusual strain). Speaker Johnson has every right to disagree with Graham and his organization, but there is a double standard when he calls those who put themselves at risk to save the lives of strangers while asking nothing in return an “affront to the community.”

Pursuing tolerance is admirable, but pursuing tolerance so far in one direction that you become intolerant in another is not. At that point, you’ve gone from tolerance to tribalism. Johnson’s inability to accept the help of Samaritan’s Purse during the COVID-19 pandemic, of all situations, on behalf of others in desperate need, puts him squarely within the later.

Thankfully, not every New Yorker took Johnson’s stance. One man who strongly disagrees with Graham on many issues still found something in common with the group: the need to help people. He became one of the pop-up hospital’s best volunteers. His story is worth a read because it illustrates a critical lesson that Johnson has missed: as we fight intolerance, we must make sure we don’t become intolerant in the process ourselves.