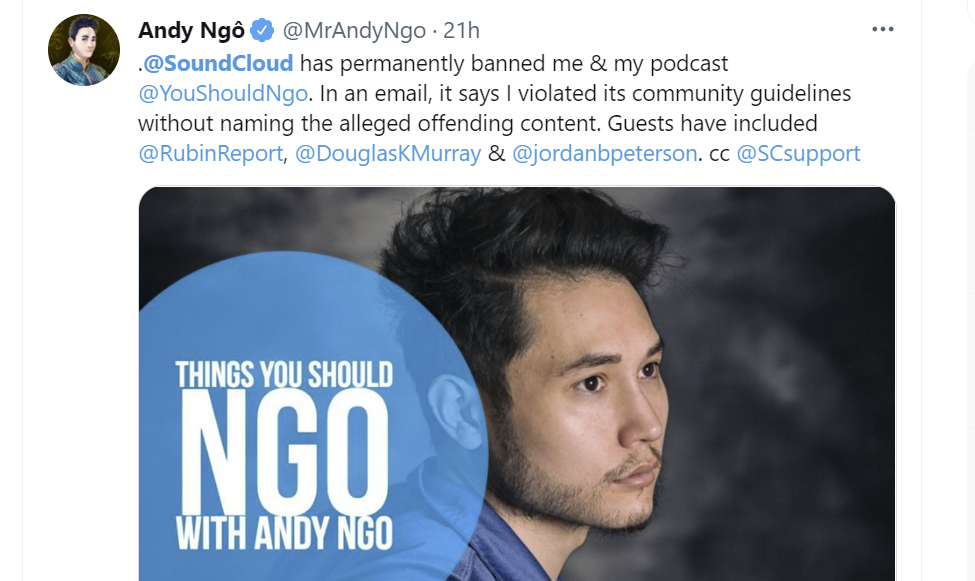 On June 29, Andy Ngo announced that his podcast had been permanently banned from the audio hosting site SoundCloud for “being dedicated to violating our Terms of Use and Community Guidelines.” SoundCloud provided no specific examples or evidence of such violations and made it clear that there would be no appeal process.

SoundCloud is a private company, so its actions against Ngo were likely legal, but that doesn’t mean that there aren’t societal consequences. Ngo is just the latest example of a conservative voice being silenced for opaque reasons, and it’s a trend that every freedom-loving American should ardently oppose.

Andy Ngo rose to prominence by reporting on Antifa, and he has repeatedly been physically attacked by protestors for his efforts. Ngo frequently stirs the ire of the Left, but he is not a fringe extremist or radical by any rational standard. His podcast “Things You Should Ngo” featured interviews with prominent public figures such as Ben Shapiro and Dave Rubin. If someone like him can be banned without warning, it begs the question: Is anyone safe?

Big Tech is under a lot of pressure to ensure their platforms aren’t being used as vehicles for bullying and violence, but using vague policies to silence voices that irritate the cancel mobs is not the solution. In reality, these actions are just a different form of bullying.

If SoundCloud and other platforms are going to continue to ban users, especially prominent voices like Ngo’s, they owe users clear rules and specific examples of violations. Otherwise, the cancel mobs win, and America loses.

Update: @SoundCloud has reversed my permanent suspension following "additional reviews of the account" after the press coverage of the past 48 hours.

I have informed SoundCloud I will be canceling my paid subscription and taking all my content off their platform. pic.twitter.com/qUdNa8UBUF