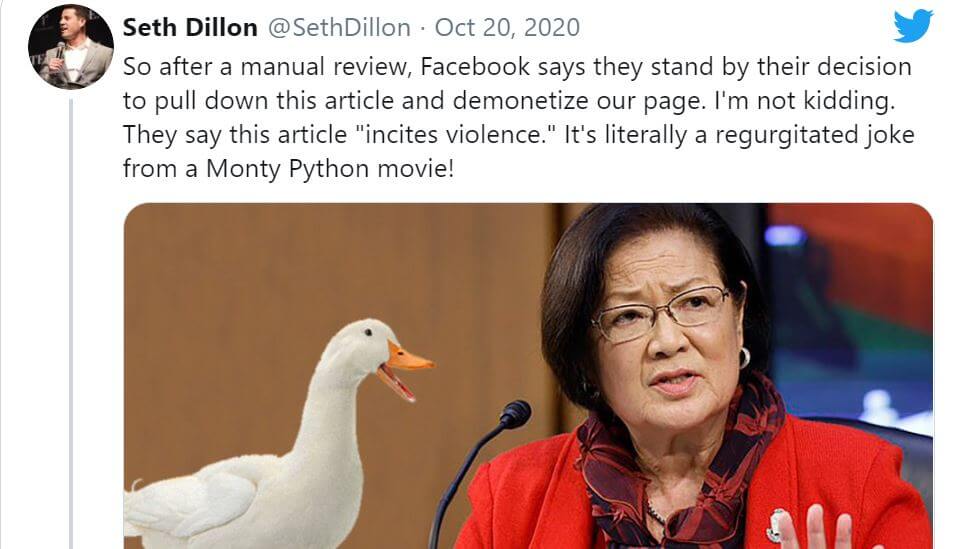 Facebook is making a great show of educating voters and fighting back against false information and hate speech while informing and empowering voters, but once again, they’re missing the mark and arguably making the problems of polarization and misinformation worse.

The latest example comes as Facebook had demonetized satire site The Babylon Bee over an article titled “Senator Hirono Demands ACB Be Weighed Against A Duck To See If She Is A Witch” because according to Facebook it “incites violence.”

If you missed the reference, it’s an allusion to a particularly silly scene in Monty Python and the Holy Grail where villagers dress a woman up as a witch complete with a carrot tied on to her nose and then demand that she be burned, prompting the knight in charge to use bad logic to discover if she’s a witch.

The satirical message of the article is that Sen. Hirono’s line of questioning during Judge Amy Coney Barrett’s Supreme Court confirmation hearing was akin to an illogical witch hunt.

Babylon Bee CEO Seth Dillon shared what happened via Twitter, tweeting as part of a long thread, “In what universe does a fictional quote as part of an obvious joke constitute a genuine incitement to violence? How does context not come into play here? They’re asking us to edit the article and not speak publicly about internal content reviews. Oops, did I just tweet this?”

It’s understandable that some of the words in the article may have tripped an algorithm, but according to Dillon, a manual reviewer upheld the decision. It’s also disturbing that Facebook expects people to stay silent about the way Facebook is silencing them.

Facebook is way past the days when it can claim to be “just a platform.” While they are a private company and, legally speaking, they can allow or disallow whatever they want, we have a responsibility as concerned citizens to hold powerful companies like Facebook accountable when they start weaponizing policies disguised as promoting tolerance.

At best, Facebook’s actions were an exceptionally dumb mistake. At worst, they are a hypocritical silencing of a particular political viewpoint. Facebook doesn’t make it easy to contact them, but maybe if we use the platform to share our displeasure with this kind of irrational censorship, they’ll get the message.